Population is exhausted and shows diminished trust in government, but also a high willingness to vaccinate

On January 27, 2020, the first case of COVID-19 infection was registered in Germany. Since then, Germans have lived through three pandemic waves with approximately 4 million infected, and nearly 100,000 deaths. Policymakers responded with lockdowns of varying severity and comprehensive (yet regionalized and sometimes confusing) contact and travel restrictions. Since May 2021, the situation has eased noticeably, driven primarily by the advancing vaccination programme and summer temperatures. But how did more than a year of a global pandemic make the German population feel? Has the pandemic affected the thoughts and behaviours of different groups within the German population differently? In this blog post, COVINFORM consortium partner SINUS-Institut summarizes findings based on nationally representative surveys conducted between March 2020 and March 2021.

After a year of COVID-19, Germans are exhausted

COVID-19 has been a part of our everyday lives for more than a year, accompanied by seemingly ever-changing countermeasures and prospects. This perpetual state of emergency is increasingly hitting Germans’ moods: in an online survey conducted by SINUS-Institut in March 2021, 46% of Germans said they felt exhausted – almost twice as many as at the beginning of the crisis (March 2020: 26%).

This emotional strain has been unevenly distributed in German society. This is shown by analysis according to the Sinus-Milieus model, which categorizes the German population into ten social milieus, or “groups of like-minded people,” based on their basic values and views of life (Barth et al. 2018; cf. Schulze 1992; Hradil 2007; Vester 2009; Reckwitz 2021).

The following graphic maps the Sinus-Milieus on a coordinate plane: the Y-axis indicates socioeconomic status, with socially elevated milieus toward the top and socially less-advantaged milieus toward the bottom. The X-axis indicates value orientation, with more traditional, stability-oriented milieus to the left and more modern, change-oriented milieus to the right. These dimensions are operationalized by means of a validated questionnaire, the Sinus-Milieu indicator; by applying this indicator within a survey, the milieu composition of a sample can be ascertained. Note that the boundaries between milieus are fluid; this is because lifeworlds and milieus cannot be narrowed down as precisely as social classes. SINUS calls this the “blurred relations of everyday reality”. 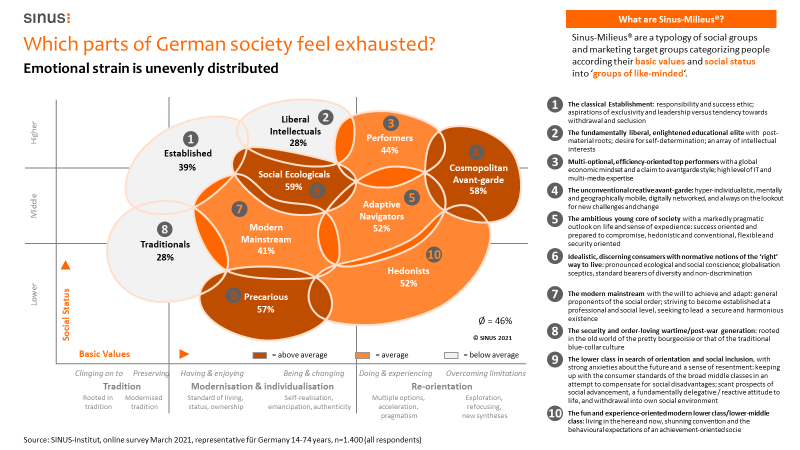 In both the March 2020 and March 2021 iterations of the survey, socially disadvantaged groups (Sinus-Milieus of the Hedonists and the Precarious) declared with above-average frequency that they felt exhausted. After one year, however, the crisis also left its mark increasingly on milieus within the social middle-field: the young and well-educated, and the socially stable but socio-politically ‘alternative’ (in the SINUS model, the Cosmopolitan Avant-garde and Social Ecologicals, respectively).

The firmest support for the protective measures can be found in the milieus that SINUS describes as the ‘old elite’ (the Established, Liberal Intellectual, and Performer milieus). The socially disadvantaged Precarious milieu is particularly divided in the assessment of the protective measures: in March 2021, for example, 40% in this milieu found the measures to be not far-reaching enough (vs. 34% in the overall population), while 35% find them to be too far-reaching (vs. 26% overall).

COVID-19 threat still taken seriously, but less so than a year ago

Three quarters of Germans plan to get vaccinated

The vaccination campaign got off to a slow start in Germany. Nevertheless, vaccination intentions were high in March 2021, with 52% definitely planning to be vaccinated and 25% likely to do so. At the time of the survey, vaccination intention was highest in the socially elevated milieus (Liberal Intellectuals, Social Ecological, Performers, Established) and lowest in the socially marginalized milieus (in the SINUS model, the Precarious). 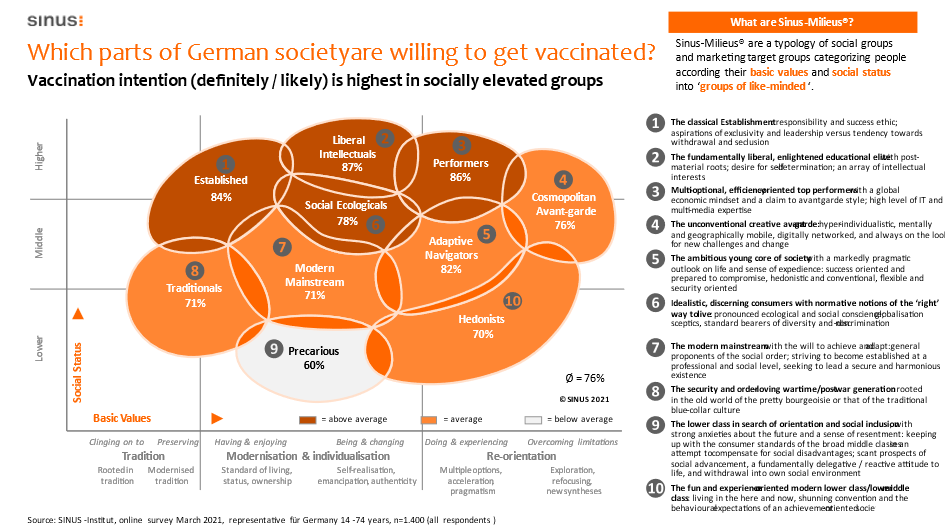 Conspiracy theories as a barrier to vaccinations?

Myths and conspiracy theories surrounding vaccination are found among a substantial proportion of the population. In March 2021, for example, 27% completely or somewhat agreed that “the danger of COVID-19 is being played up to maximize the profits of pharmaceutical companies.” This is especially true amongst the socially less-advantaged milieus. Belief in this statement moreover correlates at a statistically significant level with lower willingness to be vaccinated.

Good news: optimism is on the rise

In this exceptional situation, Germans are trying not to lose hope and were more positive about their personal future in spring 2021 than they were at the beginning of the pandemic. While 58% were still very or somewhat optimistic in March 2020, this attitude rose to 71% in March 2021. This increase in confidence is biggest in the socially elevated milieus. People also rated Germany’s future somewhat more positively than in March 2020, but this increase was only moderate (March 2021: 57% vs. March 2020: 52%). This trend is probably related, among other things, to the fact that hopes of a return to normality have increased, albeit gradually, as the vaccination campaign has rolled along.

Can Germany “build back better?” COVINFORM and the informational determinants of health

The SINUS survey results show that a year of COVID-19 has put a strain on Germans’ moods, and comprehensive but sometimes confusing contact and travel restrictions have divided German society. On the positive side, an overwhelming majority of Germans plan to get vaccinated and individual optimism appears to be on the rise.

However, analysis according to the Sinus-Milieus model shows that positive and negative attitudes are unevenly distributed in German society, as are acceptance of response measures and trust in authorities. Preliminary analysis also suggests that lower trust in government and higher susceptibility to misinformation predict lower willingness to be vaccinated, and that these vulnerabilities occur more frequently within less-privileged social milieus. This suggests that risk communication may not have been equally successful among all segments of society (cf. Wieler, Rexroth & Gottschalk 2021). If this trend persists, it could aggravate existing socioeconomically-determined health inequalities in Germany (cf. Hradil, 2009; Lampert et al., 2016).

The relationships between risk perception, risk communication, and health-protective behaviour among different social groups and milieus are among the topics under investigation within the COVINFORM project. In Germany, the project will enrich the trend monitoring conducted by SINUS-Institut and other institutions through qualitative research with key target groups such as public health administrators and practitioners, communications professionals, civil society organisations, and residents of heavily-impacted communities. This ambitious research programme hopes to provide policymakers with the insight needed to mitigate informational and health inequalities and “build back better” toward a society capable of inspiring optimism in all.

Reckwitz, A. (2021). The End of Illusions: Politics, Economics and Culture in Late Modernity. Polity, Cambridge.