During the first months of COVID-19 pandemic in 2020, news media around the world focused on how the elderly and fragile were the most vulnerable group in terms of getting a serious infection and dying from the new disease. It took some time before the news, in Sweden and elsewhere, started to report on how ethnic minorities, living in suburbs with low socioeconomic status, also seemed to be overrepresented in the mortality rates. Journalists are always trying to catch the unexpected, focusing on what is deviating, the unusual. However, this was not unexpected at all, despite the alarming headlines. Experiences from previous disasters and crises show, time after time, how vulnerable groups in society are affected more than others. In that way the COVID-19 pandemic is just like crises we have seen before. Those with limited resources and status will suffer the most. Ethnic minorities, with low socioeconomic status is such a group, and therefore the rising death tolls among them are not as surprising as the headlines indicated in April 2020.

The Swedish media debate, involving both pundits and politicians, tried to find an answer to the rising figures of casualties in the suburbs surrounding the large cities, where a majority of the inhabitants is born outside Sweden, or has parents who are born abroad. Some pointed out explanations connected to social class. Citizens from these areas were said to have limited possibilities of social distancing, since they were dependent on public transportation for commuting. Others focused on working conditions where human contact is inevitable. Swedes with immigration background are overrepresented working as bus-/taxi drivers and as health care workers, especially within elderly care. Other factors related to limited possibilities to social distancing came up, such as dense housing and many residents living in the same apartment.

Another line of arguments focused on lifestyle and cultural explanations, such as closer contacts between generations. Furthermore, language barriers, information seeking and media use was offered to help explain why inhabitants living in the large city suburbs died more often of COVID-19 than people living in other parts of Sweden. Researchers have tested a number of possible explanations showing there are layers of reasons why this situation has occurred. Socioeconomic explanations are important, but there is an area factor as well. Just living in certain areas seems to enhance vulnerability.

Our research team at UGOT tried to add a piece to the puzzle from a crisis communication point of view. Our aim was to study how people in the pinpointed suburbs seek information during the pandemic. The analysis was a part of a larger study where residents in two immigration dense suburbs in Gothenburg (the second largest Swedish city with 500 000 inhabitants) were given an opportunity to give their opinion on societal issues. This Resident Panel is a web panel, launched in 2017, that consists of approximately 300 residents in areas where we have low attrition rate in traditional surveys.

By comparing respondents in the two suburbs with a sample from a nationwide panel, we were able to see to what extent information seeking habits differed. So what did we find? Are the suburbs different worlds, in terms of how people inform themselves about the COVID-19 pandemic?

When we reached out to the panelists in late February and early March 2020, asking where they seek information about the new pandemic, their answers were to some extent similar to people living in other parts of Sweden. Swedish news media was the most important source of information. This said, there were important differences too (see figure 1). The suburb residents were less likely to seek information from government agencies’ websites; instead, they turned to foreign news media, and especially social media. The cleavage even widened when we considered other factors. Language barriers, limited identification with Sweden, and being born outside Sweden increased the gap in information seeking behavior between residents in the suburbs and those living in other parts of the country.

So what does this mean? Even if communication probably is not the most important factor explaining the higher death tolls in the large city suburbs, there are differences in terms of information seeking habits we need to acknowledge. First, one size does not fit all. Our results indicate important differences in how people inform themselves, and practitioners can therefore not rely on the most commonly used channels in society as a whole when communicating about protective measures during a crisis. Second, segregation is clearly visible in communication patterns. Gaps between different groups in society widen when language barriers and limited identification with the Swedish society is taken into consideration. Third, gaps found in terms of seeking information will probably be greater in terms of information processing and understanding. This is because the exposure to information is not the same thing as interpreting information. The knowledge gap is probably much wider than the information-seeking gap we found.

In conclusion, communicating a pandemic has many challenges, not least in relation to vulnerable groups such as ethnic minorities. There is a well-known paradox in crisis and risk communication here in that those who are most affected are hardest to reach. In addition, minority groups tend to have low trust toward government authorities and other official sources, which reduces compliance with recommended protective measures. The COVINFORM project addresses this problem for crisis management and seeks to gain knowledge to develop tools in how successful crisis communication should be designed to reach those who need to protect themselves the most. 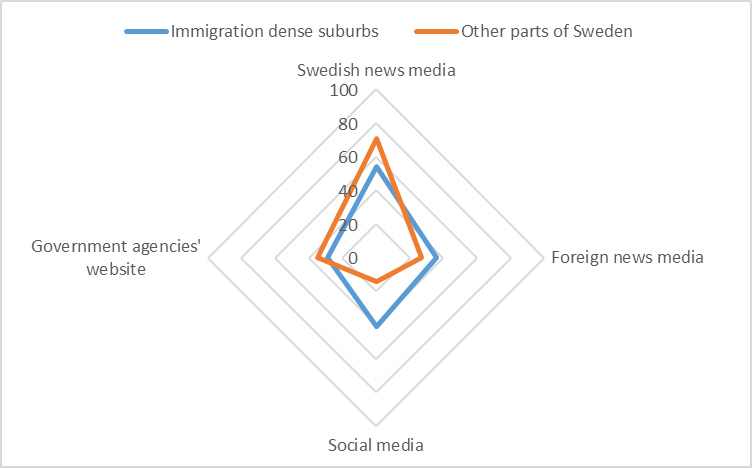 The blog post builds on the report: Crisis communication and segregation – how residents in immigration dense suburbs and in other parts of Sweden informed themselves about the coronavirus spring 2020, by Peter Esaiasson, Bengt Johansson, Marina Ghersetti & Jacob Sohlberg. Report published by JMG, University of Gothenburg (2020).