History of urban planning and relation to health crises

For a long time, the history of urban design in many European countries has evolved in response to infectious diseases. In ancient Rome, the first sewerage system was created to respond to diseases like dysentery and typhoid. The bubonic plague in the 14th century spurred the onset of larger public spaces, whilst yellow fever in the 18th century ensured the widening of boulevards and the development of suburbs. Cholera in the 19th century was combatted with the creation of modern water infrastructures, sewerage and open spaces. In the 20th century, the spread of communicable diseases such as polio and tuberculosis incentivized housing reform and improved waste management.

Although the extent and scale may vary according to the city, urban planning has historically been shaped by health concerns. COVID-19, with around 95% of cases reported in cities, is a fundamentally urban pandemic. Will COVID-19 shape urban planning in the same way urban planning has influenced COVID-19?

Urban determinants of health and well-being during the pandemic

COVID-19 has highlighted and increased socio‐economic and spatial inequalities. The figure below illustrates the determinants of health in the urban context, allowing us to understand the positive and negative impacts of the urban and built environment.  Similar characteristics determined health and well-being during COVID-19, such as urban density, public transport, access to facilities, green space and housing. 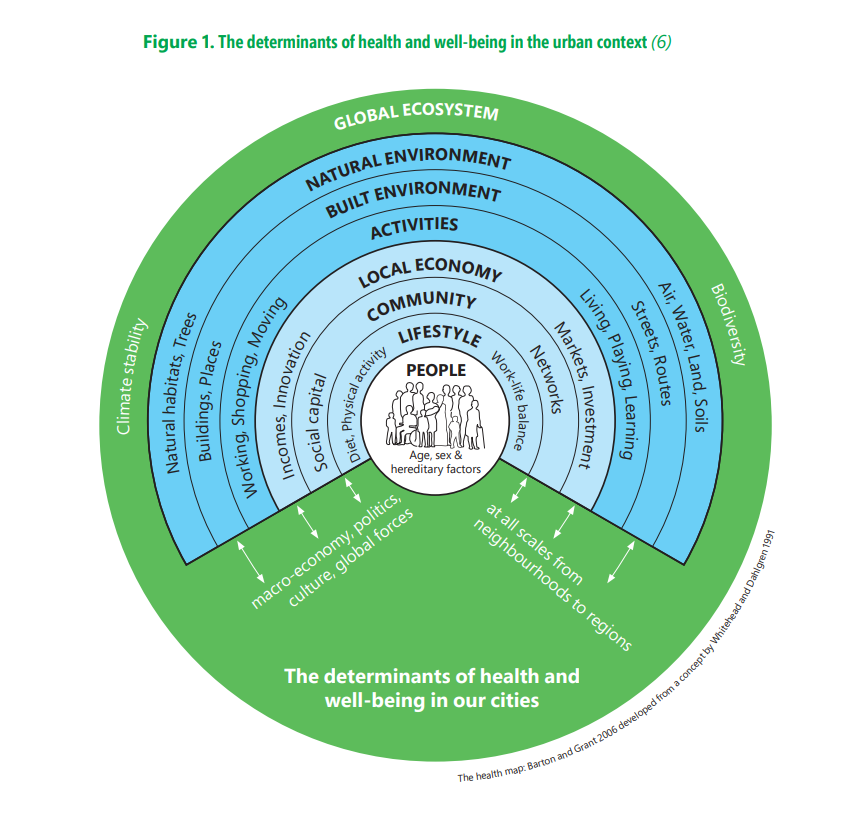 The determinants of health and well-being in the urban context [Source: Nijkamp & Kourtit, 2017]

Densely populated low-income areas with underserviced housing and air pollution were hotspots for COVID-19 spread, such as Borgerhout in Antwerpen. High-density housing or population density (the number of people per surface area)  is not in itself a driver of poor health and well-being. In fact, compact cities can enable easy access to services, public transport, social integration, and the prevention of urban sprawl – with its knock-on impact on biodiversity, natural habitats and car dependency. Rather it is the crowding within a residence (the number of people per square unit of interior space), which is more closely associated with COVID-19 spread. Apartments with insufficient space, ventilation and daylight, have been problematized as a cause of high infection rates and poor mental health during COVID-19. Interviews conducted with vulnerable groups in Antwerpen, specifically migrant groups and women from a lower-socio economic background, reiterate this.

“I sleep on the sofa in the living room. Because there is not enough room for us all. I live with my daughter and her husband and their three children. Sometimes one grandchild sleeps in the parent’s room, then I can sleep in the bedroom. This is a problem. We are always looking for a new place to live.”

“I am in a wheelchair. So when the lift is broken to my apartment, I have to sleep on the street. A week ago, I had to sleep twice on the sleep. Because the lift was broken and it was the weekend. Two years ago, during the lockdown, I lived in apartment on the third floor without a lift. I had to lift myself up the stairs, with help from a friend, every day. I was living with a friend, because I had no money.”

For those who live in small flats without outdoor space, public space such as parks can be perceived as an extension of their living rooms. Urban green spaces can mitigate some of the negative impacts of the lockdowns. When restrictions permitted, they provide space for leisure with a lower risk of infection. In contrast, residents living close to heavily trafficked roads or in areas with insufficient green space are exposed to air pollution, noise and ‘urban heat islands’. This is a problem even without the respiratory threat of COVID-19. For example, Antwerpen was assessed as having the second highest mortality rate from nitrogen dioxide (NO2) amongst thousands of European cities. Within Antwerpen, access to green spaces was uneven before the pandemic, with research highlighting the unequal distribution, access and quality of such spaces between inner-city Borgerhout and suburban Wilrijk. The spatial injustices within Antwerpen mean that lower-income vulnerable residents are “systematically disadvantaged” by urban planning, and more vulnerable to the consequences of COVID-19.

“Where I live is not really such a safe neighbourhood. You are really just trapped inside. You cannot go outside much. You really have to always be there with your children when they go outside if they are in the park or something. It is not that they can just play outside. The street where I live is a very busy street. That’s a car street so you can’t just go outside, you’re just in your apartment. I also don’t have a garden so that’s kind of unfortunate.”

Implications of COVID-19 for urban planning and health

As COVID-19 approaches its third anniversary, we can start wondering if it has led to a sustainable shift in urban planning. In some cities, the pandemic has prompted transformations to support health such as increased cycling infrastructure, and car-free or ‘15 minute’ neighborhoods. In Antwerpen for example, the Borgerhout District is creating green spaces as a response to COVID-19. These should be maintained and expanded at a city-wide level. Housing policies are also urgently needed, such as stronger protections for renters and increased social housing, to avoid the displacement of lower-income groups. This is only possible to achieve with supportive policies at higher government levels. Further, in the Belgian political realm, federal, regional, and local goals are often at odds, which limits the transformation of cities and effective solutions to urban issues.

Urban areas are more exposed to infectious diseases and its consequences, but enabling a high-quality built environment and access to green and public spaces can serve as protection for vulnerable groups. Better integrating health in urban planning will reduce current health inequalities, and enhance resilience for future pandemics, climate change and other crises. COVID-19 has shown us the importance of integrating the needs of vulnerable groups in urban design and planning. The findings of the COVINFORM research are informative to guiding urban policy and crisis responses in similar communities and neighbourhoods.